December 7 and 8, 2018, Point Reyes National Seashore. Horizons are beautiful in their simplicity. Engaging in their subtle complexity. Their moods are varied. They have endless color and texture possibilities. For all these reasons I never tire of them. But there’s another reason as well.

Horizons are calming. Soothing. Stabilizing. Horizons are therapeutic. Stand on a bluff looking outward over the sea for only a few minutes, and if you’re like most people you’ll feel both rested and invigorated. Gaze longer and a reassuring sense of stability will develop. The turbulence of life calms and a sense of order is restored. Stress dissolves. The space does that.

Space ceases to be just the horizon’s and becomes your own. The space is real. At sea level, the horizon is about three miles (almost five kilometers) away. When you stand at one hundred feet (thirty meters), as in the seascape above, the horizon is about twelve miles (almost twenty kilometers) away. That’s a lot of space to take virtual ownership of. Extend your line of sight and there’s even more space. From the vantage point of the shot at the top of this post, the nearest landfall would be somewhere in the Philippines. But if you extend your line of sight straight out and don’t follow the curvature of the Earth your gaze is measured in light-years.

Then there is stability. On a clear day, the horizon is faithfully the horizon. It’s not going anywhere. You can count on it, and in this world it’s good to have something you can count on. (On foggy days, the deal might be off — so if you’re feeling foggy yourself, the therapeutic value diminishes. Unless you get fascinated with the constant shift of patterns in the fog, in which case that’ll chase your blues away.)

Photographs of horizons can have similar effect, especially if they’re large.

Recently I’ve been shooting nearer shores. In this one, the other side of Tomales Bay is less than a mile away. It’s a composite of two intentional camera motion shots made with different rates of motion. The only other bit of post-processing was a bit of selective sharpening. The color is as it was on a moody December dusk. 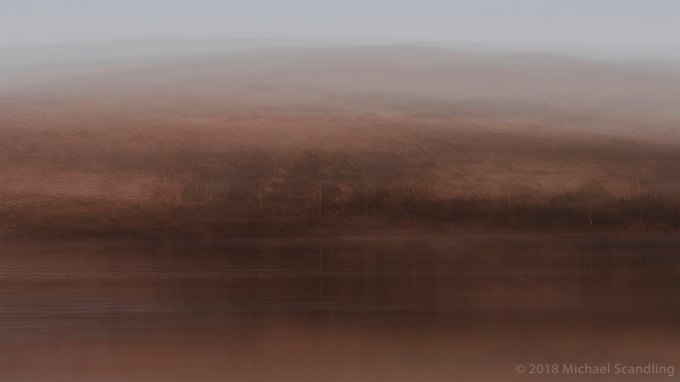 The next evening, we went out to the Chimney Rock trail in search of the setting of a crescent moon, but it turned out to be such a tiny sliver that the thin fog completely obscured it. There was a consolation prize, however: the alpenglow on cliffs on the far side of Drake’s Bay was soft and inviting. A long exposure and a twist made it ethereal.

It seems the horizon doesn’t have to be that far away to be magic. . .

California based fine-art photographer featuring abstract, impressionist, and minimalist seascapes — near and distant — and floral-based images. Fine-art photography can be seen at www.amagaphoto.com All original images on this blog are copyright 2018, 2019, 2020 Michael Scandling. All rights reserved. No images on this site may be copied, duplicated, reused, published, or re-purposed in any way without express permission from the copyright owner, Michael Scandling.